Back to Spirit Index 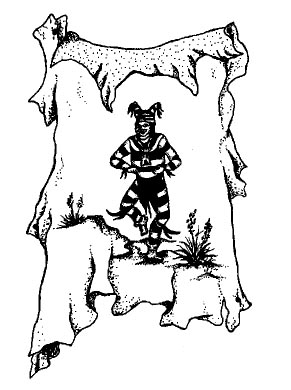 Aho Heyokah!
Make me laugh so I'll be human again.
Allow me to see my crooked path
And the Trickster as my friend.

Aho Heyokah!
How contrary you can be,
Yet you make me learn.

Aho Heyokah!
The jokes on me,
But next time it's your turn!

The Heyokah is a contrary clown who holds total wisdom and teaches the People through laughter and opposites. This Sacred Trickster is one who makes you wonder if what they are saying, or doing is actually correct, thereby making you think and figure it out for yourself. When people are made to think on their own, the wobbly beliefs that have been a rubber crutch for them in the past are tested. If the rubber crutch gives way and they end up on the ground on their rump, a lesson was learned. If they stop and think, test out a teaching for themselves and it stands in good stead, the wobbly belief becomes a Knowing System for their lives.

This Divine Trickster is called Heyokah by the Plains Tribes and Koshari by the Hopi and Pueblo Indians. Many Tribes have Trickster Teachers who dress in costume for Ceremony and wear regular clothing in daily life. Their jokes do not stop just because it is not a feast day. All Heyokahs operate through opposites. The Heyokah's purported wisdom, imparted to a seeker, could be the exact opposite of the answers the person would find for the Self. The laughter surrounding the results could be a lesson for the entire community.

The Heyokah is known for creating lessons at the expense of another's seriousness. Laughter is the ultimate lesson that breaks the bonds that destroy balance in people. If the Heyokah is successful, all is taken in good fun, and the bonds of old habits, no longer helpful, are broken. The Medicine Ally of the Heyokah is Coyote. The Heyokah is a master at Coyote Medicine and can use the joking part of Coyote's nature to trick others into enlightened states of understanding. Occasionally the Coyote Medicine will backfire and zap the Heyokah in a blind spot. If this happens, the true Heyokah will take it in stride and laugh at the backfire, learning from the lesson along with others.

Native People understood the value of being good sports. In earlier times it was not considered "losing face" to have the Heyokah play a trick on someone. In fact it was an honor to be singled out for a trick that contained a valuable spiritual lesson. Each Tribal Member was a valuable part of the whole, and many times the joke had consequences for more than one person. Everyone seeing the actual prank or talking of it later could relate those events to personal situations and grow from the lesson. All are forced to reflect on how they would react if they were the person the joke was played on. The Heyokah is able to master the art of balancing the sacredness with irreverence.

The true art of knowing how and when to use Heyokah tactics comes through the ability to laugh at one's Self while being compassionate in using the Trickster elements of teaching in a way that is not cruel or self-imposing. An experienced Heyokah will know how sensitive a student is and would never use a trick on that student to create more pain. In this situation, the Heyokah would make a joke and become the laughing stock of the situation so that the student could reflect on it through another's experience. This art of self-sabotage is planned and in no way makes the balanced Heyokah feel lesser or abused. The joy of the wise Elder within the Heyokah knows well that the results have created growth in another. The lesson is complete and even the self-sabotage was staged and yet, served its purpose.

The Sacred Medicine Path of the Heyokah can involve diminishing fear through laughter. Many people are frightened by the mystery of the Void. They have to be tricked out of their fear so that they can see that their self-created "boogeyman" was the only obstacle to Divine Connection. The Heyokah excels in situations where stubbornness stops growth. If a Heyokah knows that someone is stubborn and has to do it his way, the Trickster will tell him to do the exact opposite. Many days later we might find the Heyokah alone in the lodge giggling at the wondrous Medicine Story moving through the camp. The stubborn person had done exactly what Heyokah said not to do and had a mystical experience that was life changing. Only the Heyokah knew that due to Stubborn's refusal to be guided, the trick had worked and spiritual growth ensued.

Since the Magical Coyote is the Divine Trickster's Ally, all of the antics of Coyote are suspect. When a hunter tracks a Coyote, the trail will double back on itself many times and can fool even the most experienced tracker to the point of total frustration. Anyone trying to guess a Heyokah's next move can likewise become befuddled. Coyote teaches Two-leggeds to find joy in their own foolishness. When the Heyokah calls upon Coyote to assist him in keeping prying eyes off his trail, Coyote will assist in a multitude of ways.

I learned my first Coyote lesson in Mexico when Joaquin, my Medicine Teacher, wanted me to see how ridiculous my seriousness had become. We spent one whole day gathering dried Cow dung, Rabbit pellets, Coyote, Dog, and Owl waste and carefully placing each in an old tin bucket. The next day we spent mixing all of it together, crushing each part into powder and slowly adding water to make a paste. After this was completed, I was told to mark a circle in the earth with string and a stick making sure that the circle was perfectly round. Then Joaquin told me to fill the tiny groove in the soil with all of the paste I had made from all of the feces. I was very careful to make a perfect circle and not to let any of the circle be crooked. Joaquin praised my work and how careful I had been during the two-day process. He then told me to enter the circle and sit in the center until I understood the value of the lesson.

I sat there for at least three hours, thinking that maybe this was a way to contact the Power Animals. Finally Coyote came into my consciousness, took one look at me, and rolled on the ground in side-splitting laughter. Coyote was laughing so hard he could not speak. I was fascinated, while still sitting in my circle of poop, serious as ever. In between his guffaws, Coyote spit out the words that taught me my lesson. "For the past three days you've been examining other people's shit!" he screamed. "Now you've surrounded yourself with it and you are so serious you can't even see how ridiculous you look."

I started to laugh at myself as I imagined how Joaquin must be rolling in hysterics at the joke he had played on me. I wondered how he could have kept a straight face for two days. It finally came to me that I had spent the previous days worrying about the problems of others. All of these worries had left me, in effect, sitting in a circle of others people's mental garbage.

The lesson hit me hard, and I laughed until I was aching with no breath and tears ran down my face. It has taken me many years to master the lesson and I still get sucked in the drama of others at times. Joaquin was an excellent Teacher and even now he will come to me, in spirit, and break my seriousness with more Heyokah antics.

The primary lessons of the Heyokah trick us into revelations rather than giving us all the answers. Heyokah is needed when we refuse to allow ourselves alternatives. The view will always expand if we use the Divine Medicine of laughter - Nothing is beyond repair. We may need to use comedy to crack a smile so we can reclaim our Sacred Space.

Heyokah Medicine can be called upon through Coyote. Remember that the Divine Trickster is the perfect integration of all things wise and foolish, sacred and irreverent. When we ask for those lessons, we need to be prepared for adventure. We need to be willing to laugh and to have others laugh with us. We will have achieved the ultimate union of opposites when we learn to celebrate more than we mourn. The time has come to laugh and reclaim our divine right to find pleasure in the sacredness of being human.

If the Trickster has appeared on your horizon, you are in for a barrel of laughs. You may be doing exactly the opposite of what you need to be doing and are about to get busted for it. Stop leaking your creative energy on other people's problems or high drama. Stop being so serious and crack a smile, or Coyote will dog your dreams. Remember that some days you are the fireplug and some days you are the Dog. That goes for everyone, so don't let getting pooped on get you down. Learning through laughter or opposites can be fun.

The keynote to the Heyokah card is to lighten up and start balancing the sacredness with irreverence. If you are just being stubborn, it may be time to create a contrary lesson that will force you to crack up, crack a smile, or trick you into going into the crack in the universe to find out what's really important!


Return to Start of Excerpt
Back to Spirit Index